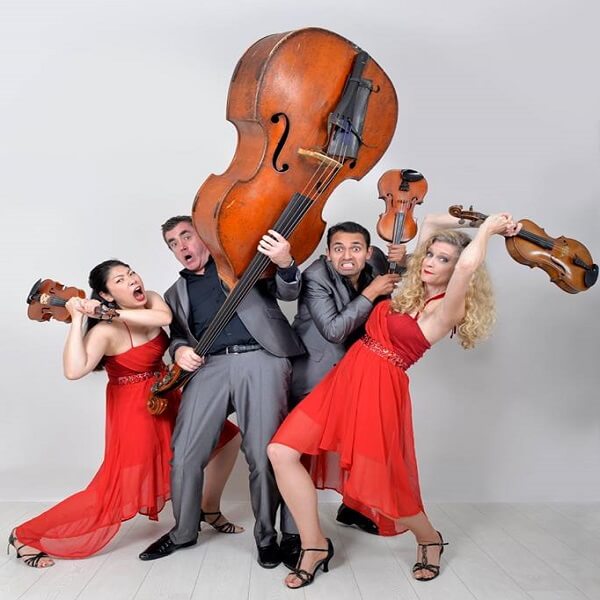 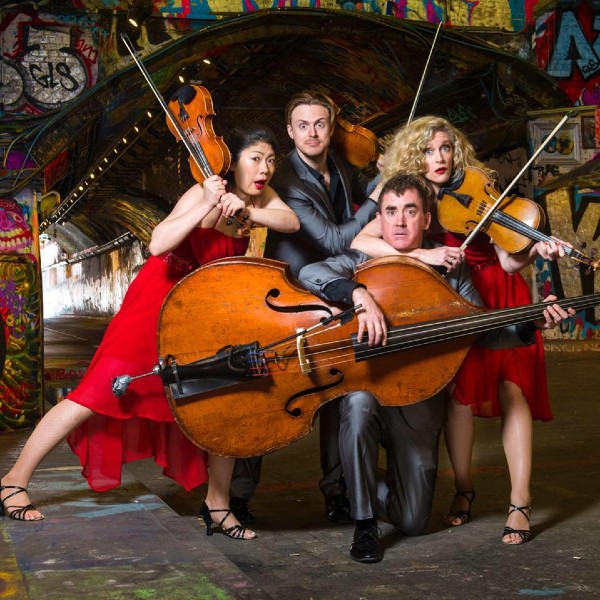 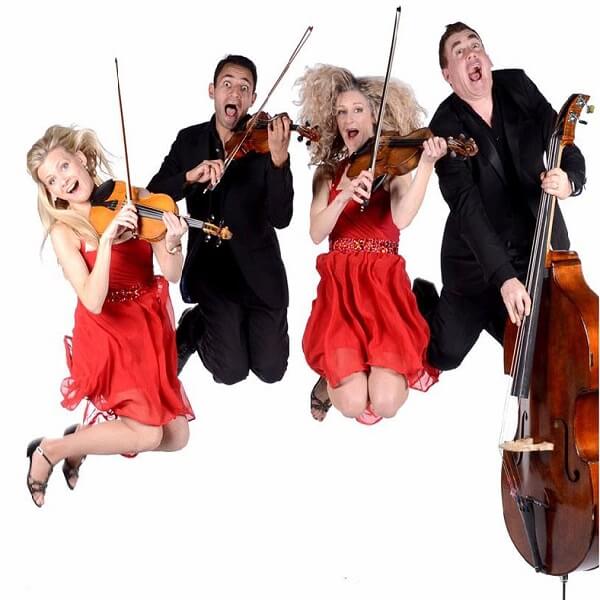 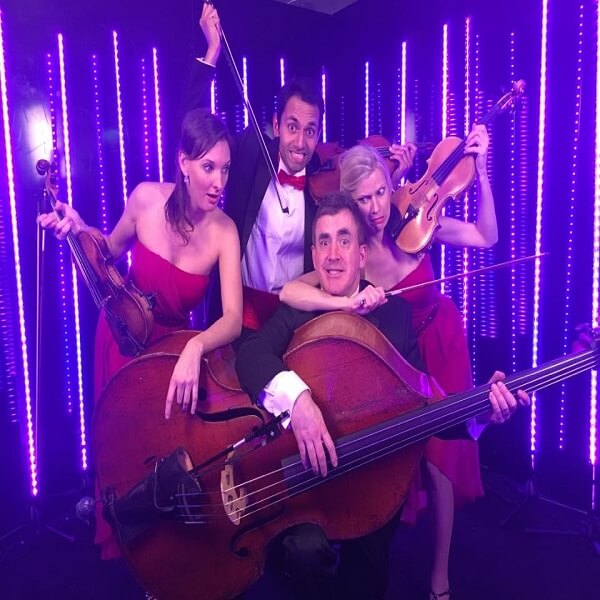 "A classical concert, a gypsy-folk romp, an opera, a stand-up comedy set and a brilliant dance show all rolled into one!"

Add some musical comedy magic to your party celebrations with mix-and-mingle performances by a professional string quartet musicians. Weaving among your guests, The Comedy String Quartet are trained in the art of playing classical music, gypsy-folk and performing stand-up comedy - sometimes all at once! Guaranteed to surprise and delight every party-goer as they work the room!

The Comedy String Quartet combine 16 strings, 8 dancing feet and 4 voices with one aim: to make classical music wickedly funny and fantastically exhilarating for everyone, young and old. This act bursts the elitist boundaries of the traditional String Quartet with its hilarious all-singing, all-dancing musical comedy show. These classical rebels will leave you feeling exhilarated as they redefine the instruments and sounds you thought you knew by performing in ways you hadn't imagined.

It's a classical concert, a gypsy-folk romp, an opera, a stand-up comedy set and a brilliant dance show all rolled into one! You will enjoy a broad spectrum of music from Beethoven to Bluegrass, Bach to Brahms, Strauss to Saturday Night Fever, Offenbach to Elvis as well as many well-loved folk tunes – all played with the Chosen Events virtuosity. There really is something for everyone and these musicians never fail to get audiences laughing, clapping and singing along. Kids and adults alike love the uplifting variety of musical styles, all tied together with cheeky audience interaction.

The Comedy String Quartet was formed by a group of young graduates from London’s top musical conservatoires, including the Guildhall School of Music and the Royal College of Music, who met whilst street-performing in London’s Covent Garden. They decided that classical music should be made fun and inclusive for everyone through interaction and comedy, creating a unique and world-class jaw-dropping comedy show. Since then, the group has performed in major theatres, festivals and venues across the UK, Ireland, Germany, Malaysia, Spain, Vietnam, Sweden, Holland, Estonia, USA, Norway, Italy, Denmark, Greece, including the New Orleans Mardi Gras, Babaro International  Festival, Edinburgh Festival, Leeds International Jewish Festival, Rochester Proms, Welsh Proms, Stadt Theater Minden Germany, Georgian Theatre Royal

Corporate Events
All-singing, all-dancing comedy cabaret adds a touch of class to any event. Our unique corporate party entertainment provides an exhilarating and hilarious alternative to the traditional string quartet.

Tailored to suit your function, clients enjoy an amazing spectrum of musical styles, including classical, jazz, opera, folk, all performed with hilarious high-energy. No audience is too big or too small, the show works brilliantly in huge venues as well as in small intimate parties.

The Comedy String Quartet plays to stadiums of 1000s with full amplification but also plays acoustically for a prestigious dining party of 10 people. The group also performs acoustically in mix and mingle style, serenading cocktail guests or playing for diners as they sit at their tables.

Weddings
For your wedding day, they can play matrimonial classics during your ceremony and then liven things up later at the wedding breakfast with its full impact comedic show. The perfect entertainment throughout your big day!

Special Occasions
For your special party or anniversary celebration, this act will be sure to inject laughter, joy and frivolity into your evening. The band is self-contained with its own amplification, microphones, lighting and sound engineer or can perform acoustically around your guests as they drink and dine.

The equipment they require from the client: PA and sound technician for large events

Space/floor height required: Can perform in any space but ideally a small stage area